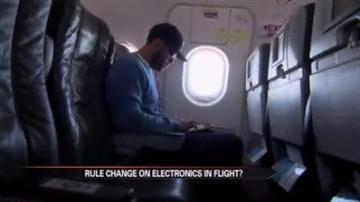 The FAA is considering changing its rules on using electronics on flights.

It would allow some devices to stay on during take-off and landing.

Right now, passengers are banned from using electronic devices below 10,000 feet on most airlines. That is because their signals could interfere with aircraft systems.

Some speculate it is also a safety issue.

"We want to make sure that, if there is a situation that passengers need to hear and understand, that they will be able to do so," said Veda Shook, Association of Flight Attendants.

The FAA committee is expected to report their recommendations this summer.

If any changes happen, it would not be until months later.