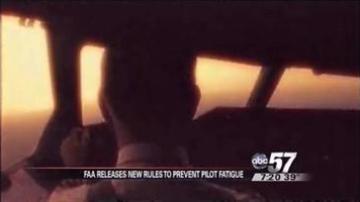 The FAA is saying get some sleep to pilots, along with some new rules to help prevent fatigue-related crashes.

The FAA guidelines will limit pilots' shifts to no more than 14 hours, that's including a maximum flight time of nine hours.

Pilots are also required to have a 10-hour rest period between shifts including eight hours of uninterrupted sleep.

“This is a big deal today. It's a big deal because for 25 years people have been talking about this and haven't done a dang thing about it, and we have,” said Ray LaHood. “The fast majority of people who fly, particularly on regional planes, will have the assurance under this rule that they're flying safely.”

While the new rules may be good news for pilots and travelers, The FAA says airlines will have to spend at least $300 million to meet the new rules.