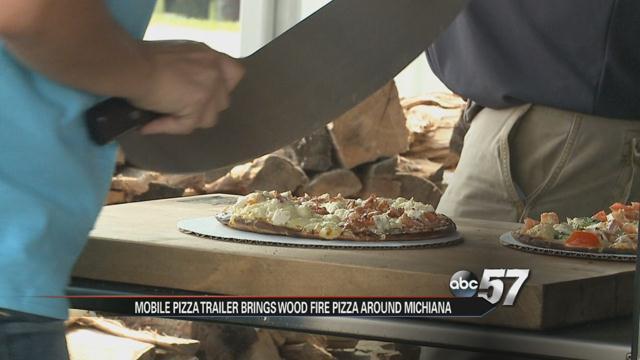 There are many different food vendors at the St. Joseph County 4-H fair this week.

One of those vendors is Fire -N- the Hole, a local business that was built from the ground up.

It is a traveling "pizza-mobile" built onto a trailer that houses a wood-fire pizza oven. It travels throughout Indiana, Illinois, and Ohio, according to co-owner Stacey Reed.

“He’s a mason by trade and builds pizza ovens and we decided to put one on a trailer,” said Reed of her husband.

The idea came from their son who had a birthday wish.

“Our son for his seventh birthday party wanted to have a pizza-oven party in the backyard and decided after we did that, we had so much fun we decided to take it on the road,” Reed said.

The party was such a hit, they created their business in 2010.

“Since then we’ve had additional parties. Whenever we want to add to our menu, we invite people over, friends and family, and say ‘alright help us guys.’ We do taste testing and expand our menu from there," she added.

The business is a family affair and every member of the family has their job.

“The kids work with us as a team. My husband cooks it, I make the pizzas and put them together. My mom actually has a bakery so she makes our crust, all handmade,” Reed added.

To fuel their oven, they chop their own wood during the fall and winter months to store it for the summer when they go on the road.

“The oven is heated to about 750 degrees and the pizzas cook in 90 seconds or less," Reed said.

Recently they got a new toy to add to their business.

Her husband Brent drives around a remote-controlled truck, delivering samples of pizza to people who stop by. As soon as the pizza is made, it's placed into the truck and driven around for hungry pizza lovers to sample.

Out of all of their made-to-order pizzas, there is a common favorite flavor everywhere they go.

Fire -N- the Hole is based out of Claypool, Indiana.