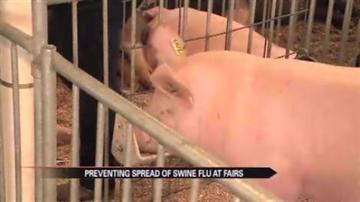 ST. JOSEPH COUNTY, Ind. -- With fair season here, Indiana health officials want residents to be especially careful so illnesses like the swine flu won’t be passed between humans and pigs.

Officials with the St. Joseph County Fair say they have never had a case of the swine flu and they hope to keep it that way.

At the St. Joseph County Fair, there are signs reminding everyone to wash their hands and use hand sanitizer.

"When the leader came around and tagged, they gave them one flu vaccination shot and then about a month later they gave them another one,” said Sam Bickle, 4-H swine participant.

"We do our best to keep the hogs healthy, give them good feed and we always take precautions to wash them, wash our hands and keep everything clean and safe so that way we don't spread anything,” said Miranda Vascil, 4-H swine participant.

Humans are actually the ones that have to be most careful.

"If a person is immune-compromised, in other words, has the flu themselves, it is easier for that human to actually transfer the virus to the pig, rather than the pig giving it to the human,” said Veterinarian Wanda Schmeltz.

While people who become infected with the virus get multiple flu symptoms, it's much harder to tell if a pig is sick. The only flu-like symptom they show is a running a temperature.

"When we pulled up for load-off they checked the temperatures of the pigs to make sure they were the correct temperature,” said Bickle.

"If they had a high fever they didn't get to be unloaded," said Schmeltz.

Schmeltz says the best way to prevent an outbreak is to steer clear of the fair if you have flu-like symptoms.

"If you've got the flu, or you're sick or you've got a fever, you should stay away from the animals for at least 24 hours until the fever breaks, just to make sure that you're not going to transfer that flu virus to a pig,” said Schmeltz.

With the LaPorte and Cass county fairs coming up next week, the Elkhart County Fair in two weeks and the Berrien County Fair in August-health officials encourage everyone to be smart and take a few extra minutes to thoroughly wash their hands after spending time around the animals.