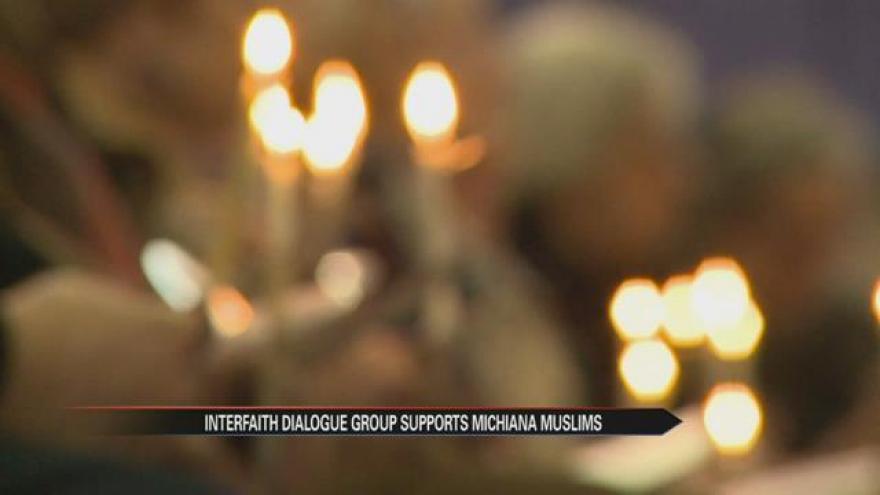 People of all faiths gathered Friday afternoon in South Bend to show their support to local Muslims.

The Interfaith Dialogue Group hosted the event, where they gathered signatures and  presented the Muslim community with a petition offering their support and protection.

That darkness: judging all Muslims for the actions of radical terrorists.

As a Muslim woman Rabia Yasmin Shariff wants those in the dark to know she’s not what you may think.

“Violence is as scary to a Muslim person as it is to any other person,” said Shariff.

Yet for Shariff and other Muslims who attend the Islamic Society of Michiana judgment comes when their faith is associated with acts of terror.

“People always go and do something in the name of God. That’s not true, that’s not Islam. These people who are doing this are misled,” said Khalid Khan, member of the Islamic Society of Michiana.

Sarnat, a member of the Interfaith Dialogue Group, is not blind to judgment and hatred among different cultures and religions. Many of her Jewish family members were victims of the Holocaust.

“I know how easy it is for ignorance, and by that I mean lack of knowledge, can impact people. I know how easily fear can spread,” said Sarnat.

So instead of spreading fear, Sarnat joined a roomful of others Friday afternoon to spread a light.

Christians, Muslims and Jews—often characterized by their differences illuminated their similarities.

“We all light candles together that shows there’s light, there’s hope for us to all have a better life,” said Shariff.

As one candle flame spread to dozens across the Mosque the light provided not just hope but unity.

“It makes me really happy to be in this great country where people from other faiths can come and support me when I need it the most,” said Khan.

“It enhances our lives by reinforcing my sense of belonging. My core American-ness,” said Shariff.

To find out more information about the Interfaith Dialogue Group, click here.