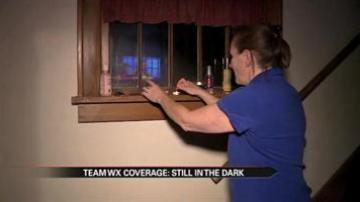 SOUTH BEND, Ind. -- Thousands of Michiana residents are spending yet another night in the dark, as another day without power goes by.

Since Sunday’s storm her and her family have been without power.

Cold temperatures, along with the fear of all her food spoiling prompted Sherri and her husband to buy a generator.

She said a lot of the major hard ware stores were sold out of them, but they were able to find one of the last few.

“Just to be able to even get that was just great. That was a total blessing. The only word for it.”

It is providing heat and the ability to watch television.

But still, they are having to make extra accommodations for things we take for granted.

“We got the car charges for the phones so if they run low we just go out to the car and charge them, so we still got that as far as clocks.”

On the sunnier side of things, power is back on at Sunnyside Street.

People there also said it has been a rough couple of days.

“Frustrating, but how could I possibly complain because there so many people that have had bigger problems,” said Lou Ellen.

But right now thousands of families in South Bend continue to wait for the lights to turn back on.