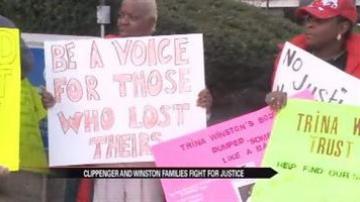 SOUTH BEND, Ind. -- Two families had lives of loved ones taken away by convicted killers and now they want a change in our justice system.

The families held a rally at the St. Joseph County courthouse. It was all in an effort to push Indiana legislators to take a closer look at current early release rules by starting a petition.

"I know their pain, I know what they are going through," said Chris Clippinger.

This year, tragedy struck both families when convicted killers killed again, taking the lives of their loved ones.

Police say Tarrance Lee, 49, murdered his estranged wife, 45-year-old Trina Winston, when she tried to leave him to escape his violent abuse.

Then there is Matt and Lisa Clippinger. Police say Matt's brother, Steven Clippinger, 41, shot and killed the couple after Matt took away a revolver the ex-convict was not allowed to have.

What ties these two families together is the fact that both men were serving time for other murders and had recently been released from prison early for good behavior.

"It is just not fair, it's not right, there is no justice in it," said Trina Winston's sister Tracy Winston.

"If they get a life sentence that is what they should serve because we as victims get served a life sentence too and we don't get a reprieve, so the shouldn't either," said Chris Clippinger.

That is why these two families have decided to join forces to stop good time credit for violent felons.

"My whole fear is reading about another family going through this, it should never have happened," said Tracy Winston.

The families rallied in front of the courthouse to sway Indiana lawmakers to change the current early release rules so that convicted murderers are not put back on the streets with the potential to kill again.

Clippinger and Winston said they cannot do it alone, they need the community's help too. That is why they have started a petition through Change.org

The petition already has over 700 signatures, but the families said they are still far from reaching their goal of 10,000 signatures.

"I don't want anyone else to go through what we have gone through, through the horror and the pain," said Chris Clippinger.

The families will be back at the courthouse to rally again Friday at 5 p.m.

The Winston family is also using the rally as an opportunity to collect donations for the Trina Winston Fund.

The family said they still need $600 just to get Trina's remains home from Chicago, where her decomposed body was discovered beneath tires and other debris last month.

All donations for the Trina Winston Fund can be made at any local Wells Fargo Branch.