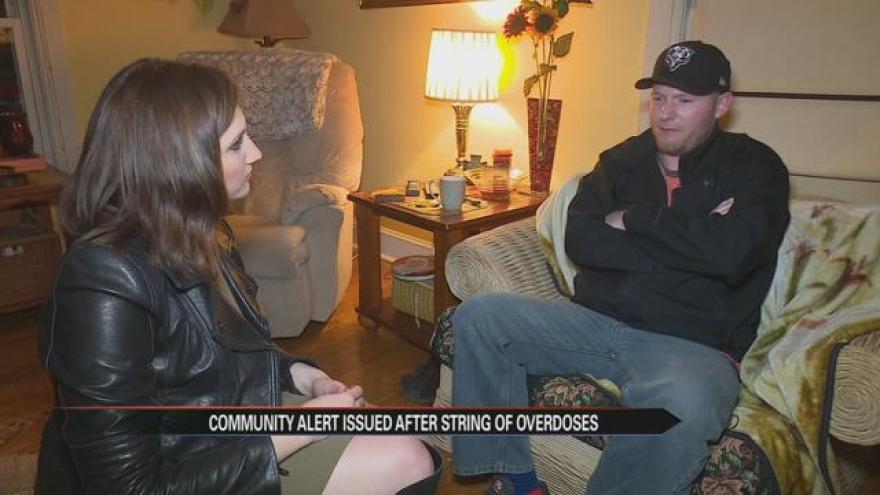 The La Porte County Sheriff’s Department has issued a community alert after eight overdoses happened in a little more than 24 hours. ABC 57’s Jess Arnold spoke with family members of two of them.

His little brother is one of the eight people in La Porte County who overdosed in a little over 24 hours at the end of the week.

He didn’t make it.

“You ask if him if he’s okay, and he says he’s okay, so you think he’s fine, but you just don’t know what’s going on really in their head,” said Ellis.

Right across the street lives a man whose grandson joined that statistic.

“My grandson is in the hospital at this time right now and has been for the last two days because of the outbreak of this drug business that’s taking place in our town,” said Robert Lower.

Doctors say he likely will never wake up again.

“It’s not just that individual. It’s the family. It’s the friends, and everybody pays the price,” said Lower.

“This has broke us down very badly,” said Ellis.

With this rash of overdoses being the worst in a while in La Porte, authorities have issued a community alert to try to curb the trend.

“What we’re hoping to do is to recognize the fact that that is out there, to have people recognize if you’ve got a loved one that’s in the throes of some type of an addiction, to watch them more closely, if necessary get them out of the area…so that they don’t end up as a statistic or even a fatality,” said Captain Michael Kellems of the La Porte County Sheriff’s Department.

“I wish I could have helped him,” said Todd.

But, he says that’s hard to do if they refuse to help themselves.

“If they’re acting like they don’t have a problem, there’s nothing you can really do about it, you know?” he said.

So he and Robert Lower are just left hoping this is a wake-up call.

“You just have your life once and why not try to do the best that you can with that?” said Lower.

This is only the second month that the La Porte County Drug Task Force has been in existence. In January, they worked 47 cases and made 30 undercover drug buys, so officials say it is effective.

They hope that the crackdown has a ripple effect sooner rather than later.