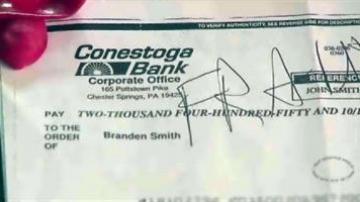 SOUTH BEND, Ind. -- The Better Business Bureau says people all over the US are falling victim to a Monster Energy Drink scam on Craigslist. A South Bend family caught on to the scam before they lost any money.

"It looked real. It had the heat mark on the front of it, security features on the back, the water marks - everything," said Courtney Crew.

When Courtney Crew and Brandon Smith got a check in the mail for more than $2,400 they thought their prayers had been answered.

"Trying to take care of a little girl, we’re on the verge of almost being homeless. We’re really hurting right now," said Crew.

They’ve been searching for jobs for months.

A couple weeks ago they came across an offer that turned out too good to be true.

Someone pretending to work for Monster Energy Drinks offered them $400 a week to wrap their car in Monster logos.

They replied to the post, and a few days later found out they’d been hired to advertise for monster energy drinks - or so they thought.

"They wanted make and model of the vehicle, our address, our bank accounts," said Crew.

A couple days later a check was delivered to their front door.

"It felt good. It was exciting you know," said Crew.

They were told to deposit the check at an ATM machine and then wire a portion of the money back to the company.

Instead, Crew took the check inside to a teller where she and Brandon found out the check was no good.

"Thought this was going to help our bills get caught up and found out it was a fraud. It's kind of heartbreaking," said Crew.

Jensen says although it's not a real check, the ATM wouldn’t have picked up on that right away.

Crew would have been wiring money they didn't have to a fake company.

"That is cash. It’s the same as if you just had cash in your hand and I just gave it to you. It can be all in one day your account can be wiped out," said Jensen.

Monster Energy Drinks says they are not involved in any way with this scam.

The Better Business Bureau suggests taking checks to a teller to have them checked before depositing and withdrawing the money if you get a check from someone you don't know.