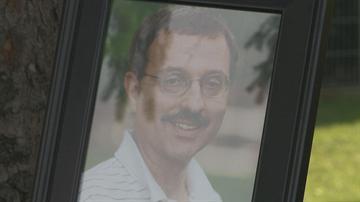 GOSHEN, Ind. – Tuesday marked the one year anniversary of the brutal murder of Goshen College Professor Jim Miller, his family and the community came together on the school’s campus to honor his memory.

Miller was beaten and stabbed to death early on the morning of Sunday October 9, 2011, while defending his wife Linda from a man who had broken into their home on the 1700-block of Wildwood Court.  The shocking crime outraged the Goshen community; the murderer is still on the loose.

“I would have said it was harder on Saturday, when my son was away at a band contest, coming home late at night, it was homecoming weekend here at the college, it was exactly all the same conditions as it was,” Linda Miller said of the anniversary of her husband’s murder.  “It was a really rough day.”

Linda Miller spent several days in the hospital after being attacked by the same man who murdered her husband.  She said she’s tried to move on and find peace in her life along with her children.

“Somebody came into our house and did horrible things,” Miller described.  “I am hoping to heal, I still have a lot of pain in my heart and there’s still this pain in my life, I’m hoping for healing for my kids.”

In the days after the murder the Goshen Police Department released a sketch of the suspect based off of Linda Miller’s description and in the past year officers said they’d received hundreds of tips.  But, the suspect is still on the loose and has yet to be identified.

“On one level I hope they find this guy, because he needs help,” Miller explained.  “I’m more concerned about us than I am about him and I’m just going to trust the police will find him.”

Miller said she stays in regular contact with detectives to keep updated on the case, waiting for the day when the suspect is caught and the family can have some sort of closure.

“There’s always stuff happening with the case,” she described.  “It’s just not bringing forth a conviction or arrest.”

Around 50 people, including the Miller family, gathered at Goshen College’s “prayer labyrinth” to hold a memorial ceremony in honor of Professor Miller on Tuesday afternoon.  Former colleagues and students sang, prayed and shared their memories of the passionate educator who had a great sense of humor and was dedicated to his family.

“I had lunch with him several times a week because I was a commuter student so I couldn’t really afford to go back and forth all the time,” described Peter Martin, a former student of Miller’s.  “He noticed that I was alone a lot during lunch, so he took the time to have lunch with me.”

For most of the past year the focus has been on the violent crime that took his life, those who knew Jim Miller said it was time to pay attention to what kind of friend, teacher, father and man he was.

“I don’t think I realized how much it would hurt to have Jim gone and how long the grieving process would be,” Linda Miller said.  “I have a tremendous faith in God, I am not going to give up on this, we are going to return eventually to some kind of normalcy.”

In a press release regarding the anniversary of Miller’s murder the Goshen Police Department said they are continuing to work with the Indiana State Police Laboratory to examine the “extraordinary amount of evidence” taken from the Miller home.  Police Chief Wade Branson said the department has not given up on the investigation and is still seeking any information the public can provide.