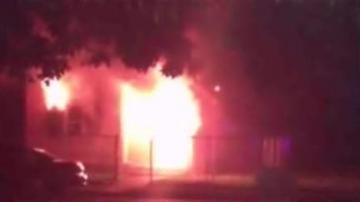 SOUTH BEND, Ind. – A family lost one of their dogs in a house fire early this morning on South Bend’s southwest side.

Fire crews originally heard reports that people may be trapped inside.

“There was a fair amount of flames coming out the front, and our first engine company went in and hit it head on and they were able to knock it down and get right to where the people were supposed to be, so they did a great job,” said Battalion Chief Nick Tekler.

Tekler said the family was out of the home before crews got to the scene.

The woman who lives there said their older dog managed to escape, but their little Boston Terrier died inside.

A neighbor who lives one street over was having a cookout with his friends when noticed the flames, and rushed over to film the fire on his cell phone before crews got there.

“I was actually kind of scared. At one point I thought the house might blow up. You know, the window started shattering and it was a big noise,” described Horacio Galvez.

The woman who lives there told ABC 57 she thinks the fire started in the bedroom. She told officers an outlet started smoking when she plugged a fan in.

Tekler said the majority of the heavy flames were showing in the first story, near the front door.