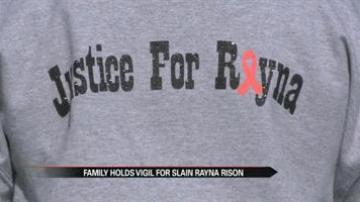 LAPORTE COUNTY, Ind. -- On Friday, the man accused of killing 16-year-old Rayna Rison in 1993 will be in court and her family will face her alleged killer for the first time.

Jason Tibbs, 38, was arrested in August and charged with Rayna's murder.

Rayna's family members say they have relied on their faith to get through the past 20 years and it will get them through court and the prayer vigil.

"She was kind, and giving, and very sweet," said Wndy Hakes, Rayna's sister.

Hakes has lived without her sister Rayna for more than 20 years.

Every day is a little bit harder than the last she says.

"I went from having two sisters to one sister. I had to learn my new normal. And then I got married, I had children, and I had to learn a new normal again - to teach my children who my sister was without her being here," said Hakes.

Rison was just 16-years-old when she was murdered.

He was just arrested in August 2013 and remains in the LaPorte County Jail without bond.

"It's just going to unfold - and he's right in the middle of it. He did it," said Jennifer McSurley, Rayna's cousin.

Rayna's family says they want justice for her.

They'll come face to face with her accused killer for the first time Friday in court.

Refusing to let Rayna's memory pass away, Hakes, McSurley and community members are holding a candlelight vigil in her honor.

"When she was found, it wasn't just our family grieving. It was the whole community that grieved for a girl they didn't know. But they felt terrible she didn't come home," said Hakes.

The prayer vigil for Rayna will be held at the United Methodist Church in rolling Prairie on Wednesday at 6:30 p.m. Everyone is welcome.