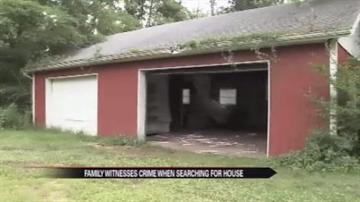 SOUTH BEND, Ind. --A family went to look at a house for sale and walked into a huge heist Saturday evening.

The witness of the crime, who asked for her identity to not be revealed, went with her family to check out a house on Kern Road.

“It was late at night, but we were just going to go check it out. We figured it would be vacant,” said the witness.

The big appeal to the house was the garage.

“He works on cars and he wanted that garage,” said the witness.

So the family of three went to the back to check it out.

When they arrived the side door was a jar, so they grabbed a flashlight from their car and went inside.

“There are like thousands of dollars of generators in there,” said the witness.

But that was not all the family saw inside the garage.

“His face turned white and he was like, 'Wow man, I am sorry,' and he pushed me and he said,'Turn around. Run!" We ran to the car. I did not know what was going on and he was like, 'There is a guy in there,'” said the witness.

They apparently walked in on a massive generator heist and quickly called the cops.

Police arrested 20-year-old Kelvin Tweedy of Niles and 33-year-old Kenneth Hawkins of South Bend.  They have both been booked into the Saint Joseph county jail.

The witness said she will never look at a home at night again, but she was happy to help police catch the two criminals.

The witness says according to the lead investigator, the generators were stolen from an R.V. company in Elkhart.