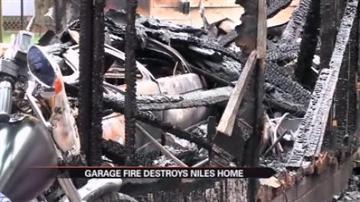 NILES, Mich. -- A family living in a home on Lawndale Avenue in Niles, Michigan was lost four cars, a motorcycle and everything else they owned in a house fire that started in the garage.

The fire on Lawndale Avenue Wednesday morning was substantial, but could have been worse.

Chief Gary Brovold of the Niles Township Fire Department said one of the people inside the home discovered the fire.

"He was awakened to the smell of smoke which is not usual. He must have been a light sleeper,” said Brovold. "He said when he got up he noticed low smoke in the bedroom upstairs. He went downstairs, didn't notice any smoke downstairs at all.”

Then he opened the door from the kitchen to the garage and saw it was in flames.

He left it wide open and ran to get everyone out of the home.

When crews arrived the garage was ablaze.

"It was through the roof; flames were well vented out of it,” said Brovold.

Everyone made it out of the fire alive, with the exception of two cats.

The fire destroyed the garage and everything in it.

The heat was so intense it even damaged the home next door.

Fire investigators are still searching for a cause.

"There was no known reason for a fire to start in that corner, so we're going to look a little deeper into it, but it appears to be accidental,” said Brovold.

Regardless of how it started, Chief Brovold said it was lucky the man woke up when he did.

"Smoke normally will not wake you up. It will put you into a deeper sleep. So the fact that something woke this gentleman up really made the difference for him to be able to get everybody out sooner,” said Brovold.

Of the vehicles damaged by the fire, one of them was a new SUV the family had just bought.

Another was a motorcycle that was a family heirloom. They hope to be able to replace the damaged parts on the bike to save it.