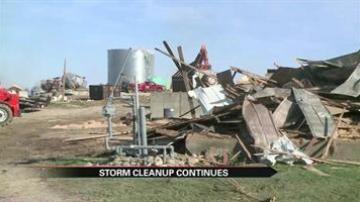 "I'm grateful to God that all of us are living. We could have been having a funeral today," said Teresa Martin.

It was about 3:30 Sunday afternoon when their farm was hit by an EF-2 tornado that ravaged Silver Lake.

"I heard a train sound. We got to the basement immediately, we had pressure in our ears, a loud explosion and I knew we had been hit," said Martin.

Martin's son and his family also live on the property, but they didn't make it to the shelter.

"They had blood on their faces, they did not make it to the basement in time and they are the miracle ones, that they are alive. Their house is totaled, a disaster," said Martin.

On Tuesday they demolished what was left of the barns at the farm.

Martin says there were 600 cows in the barns when the storm hit. At least ten are dead.

"Cattle were scared they were running around everywhere. They had to be corralled up into trailers," said Martin.

Martin says she doesn't know what they would do without all the farmers who are rallying around her family.

"There was a quarter of a mile of cattle trailers coming in and moving cattle for us," said Martin. "The overwhelming support from people is unbelievable."