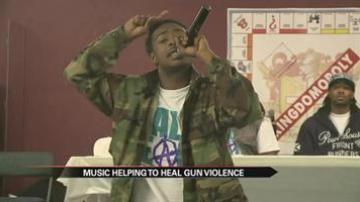 SOUTH BEND, Ind.-- On Tuesday a 19-year-old was shot and killed on Fremont Street in South Bend. The victim's family said they are devastated, but music is helping them cope with their loss.

Bluthers Casey said he heard gunshots and was shocked when he found his cousin lying motionless in the street.

Casey said, "I couldn’t make my legs move fast enough to go see him because it was hurting so much.”

Casey said he wishes he could have prevented the shooting.

However, the death of Cornell Taylor was not the only event that rocked their community this week.

On Friday, 27-year-old Matthew Mitchell was stabbed to death in a house on Rush Street. Michael

Stuckey said, “We are at war with each other, over things that really don’t matter for our children’s future.”

Stuckey and his music partner, Kerry Wilson, hope to develop a program in this neighborhood to teach young adults to resort to music instead of violence.

Wilson said, "A lot of people are hurt from this because he knew a lot of people, he was pretty well known in the community. It’s tragic. It’s a tragedy for something like this to happen.”