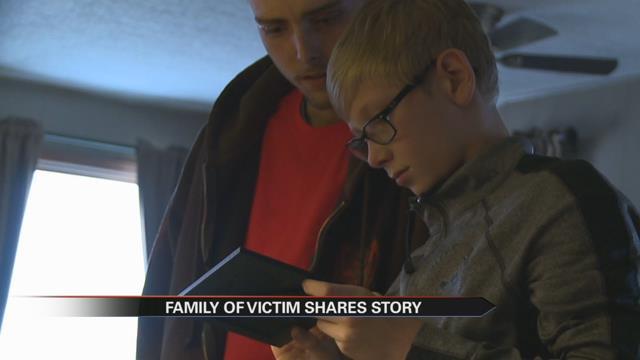 It’s been almost two years since Tony Coleman was killed at a bar in Knox.

Coleman’s family is hoping that the long-awaited progress in the criminal case will help them heal.

“Fair is something that we wish for. But Tony Coleman he was a great man, and a hard worker. A family man,” said Joseph Coleman, Tony's son.

“I just think he wanted me to have fun and enjoy life and I did for a long time,” said Alec Coleman, Tony's son.

12- year-old Alec says that feeling ended suddenly when he and Joseph’s dad Tony was killed.

Tony’s older son Joseph had only recently been able to reconnect with him.

"I had only met him in person three times. We talked and he told me that he loved me and that he wishes things were different and that was the last I ever spoke to him,” said Joseph.

Coleman was killed on May 25, 2014 when Zachary Clark of  Peru threw a deadly punch straight to his head.

The two didn’t know each other and witnesses say the attack was unprovoked.

“He has no memory. Ultimately what he can remember is that he sat down, was noticeably intoxicated, asked for a beer, was served a drink and doesn’t remember anything else until later on after the incident occurred,” said attorney Vince Campiti.

Campiti is representing the family in their civil suit against Clark. Although its been nearly two years, the family is still looking for answers.

“Somebody could have stopped him from doing what he did,” said Alec.

The Coleman’s attorney says that “somebody” who should have stopped Clark is Leiters Ford Tavern in Knox.

According to police they continued to serve Clark that night after he was visibly intoxicated, which is against Indiana Liquor Laws.

On Monday, Clark provided his deposition for Campiti’s case.

The wrongful death case is just now moving forward because of the delays in the criminal case. It was postponed multiple times and just when the family expected to go to trial last Thursday Clark plead guilty so the case wouldn’t go to trial.

“I just want to see him be remorseful and be punished for my mom and dad’s sake especially. Someday he will have to face god for what he’s done but I just want to get it all put behind us,” said Tracey Coleman, Tony's sister.

Clark will be sentenced for the criminal charges on April 12th. The civil case against Clark and Leiters Ford Tavern is expected to go to court by the end of this year.