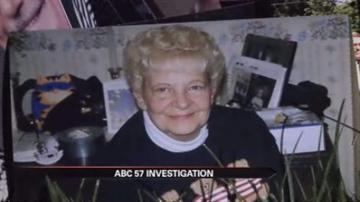 MISHAWAKA, Ind. — A Mishawaka family never thought their mom's death would happen the way it did one month ago.

89 year old Christel Moryl's life ended when she walked out of her Mishawaka senior home, fell into a pond on its property and drowned.

Mishawaka police ruled her death accidental, but the family believes Waterford could have prevented it.  They are days away from filing a lawsuit against Waterford at Edison Lakes. They want to know how their 89 year old mother walked, with a walker, out of the door of the facility in the middle of the night unnoticed by the 24-7 staff and walked into an unprotected pond.

Fred Fuller and Terry Haring said they never expected the phone call they got from police a month ago.

“Police called and said we just found your mother drowned. I said nah [sic] come on. drowned? Yeah she was in the pond out front. Nothing makes sense,” Fuller recalled.

It's still hard for him to make sense of how his frail 89 year old mother shuffled, in a walker, to her death.

He says the side doors at Waterford were far too big and heavy for her to open on her own.
“She did not have the strength to do anything but walk out a door that was already open,” said her daughter, Terry Haring.

As for the front door, the family says it opens with the push of a button.

“I am not sure what happened. I just know that my mom, on her own, could not have pushed a metal door open by herself and walked out a door,” said Fuller.

The Mishawka police report says the staff member on duty that night saw her around midnight in the halls and that it looked like Moryl was headed to her apartment so she left to do her rounds. Then seven hours later her body was found floating in the pond on Waterford’s property.

Waterford’s Resident Handbook clearly states that the front desk staff is on duty 24 hours a day, 7 days a week.

ABC 57’s Kim Chappell asked Haring, “Did you feel like that meant that no one was leaving in the middle of the night?” and she said, “I think that is one's assumption.”

Their other concern beyond the door and staffing is the pond that their mother walked or fell into.
It is steep and lined with slippery rocks. There is no fence or barrier around it and it sits just feet from the side and front doors of the building. Police had a hard time pulling Moryl’s walker out of it.

“I drove by these ponds and I never thought my mom would drown in one. Because I thought she was safe,” said Haring.

While the manager at Waterford, Tonya Odell, would not comment on this story, she did tell ABC 57 two days after Moryl’s death that they are not to blame.

“What happened to Christel is an unfortunate accident that could not have been foreseen,” said Odell.

Because Waterford is classified as an Independent Senior Living Facility, it is not licensed by the state.

It’s up to each family to hire a third party nurse if needed.

But Moryl’s children say it doesn’t take a registered nurse to watch the front door.

Kim Chappell asked them, “You think they are responsible for your mother's death?"

"Of course they were. She was in their facility, on their grounds, under their watch,” said Haring.

“It is a little inconsistent to say come live here and we can provide a safe environment for you and then when something bad happens you can say well too bad, it’s not our job to protect you,” said Olsman.

In the prospective client packet, Waterford does a great job of selling their stacked calendar of events for seniors, their spacious floor plans and even provides two brochures about how to pay for the facility. But how are they selling the safety of this facility to an aging and vulnerable population looking to call this place home?

One Niles man went in to find out. Dennis Comfort is browsing for a future home for his 85 year old loved one. He agreed to share with us the audio and video he recorded while inside.

“Someplace where I know she will be in good hands,” he said.

The video shows him getting a tour of the facility as he takes video of the rooms. The manager giving the tour is Tonya Odell, the same one who spoke to ABC 57 on camera just two days after Christel Moryl’s death.

Dennis explains to her that his loved one is suffering from slight dementia and she recognizes that by saying, “Sounds like there are some short term memory impairments going on?” Odell said.

The police report from Moryl’s death said she was suffering from severe dementia before she walked into the Waterford pond and died.

Just three weeks after Moryl’s death, here’s what Odell had to say to Dennis.

“People do very well here with short term memory loss. But again, our residents don't go out and take walks they are not going to walk. I don't have anyone here that I fear is going to walk across the street,” Odell is heard saying.

When Dennis again voiced concerns of his loved one wandering off, Odell made it very clear they are not a locked, secure facility.

“If you were to put her in a secure unit, and I certainly understand your fear, I think that she is going to go downhill because she would be around people that are more severe off as far as dementia,” Odell said.

Olsman said it all comes down to running a business, “We are now in the wild west, if you will, in the care of the elderly in our society.”

That's how Olsman describes independent living facilities like Waterford that are popping up all across the country. He's about to file a lawsuit against the facility on behalf of Moryl's family.

“This is a great lady who the family had legitimate expectation for her care and certainly did not envision that their mother’s end would come floating in pond outside of a senior housing complex,” he said.

The problem, Olsman says, is that these facilities, unlike nursing homes or assisted living homes, are unlicensed by Adult Protective Services.

If a dementia patient like Moryl worsens in the time she was under their roof there is no medical regulation, or law, of when she should be moved to a state licensed facility that can properly care for her.

“At what point does the facility say you know your mother and father conditions have changed and we don't think this is a safe environment. That is a difficult thing for a business enterprise to do,” said Olsman.

“They know. They know the mental health of these people. So that is fine to say maybe we shouldn't have been there but they never asked us to remove her,” said Haring.

The contract given to potential clients clearly states that the provider can ask a patient to leave if quote "you require licensed nursing care or assisted living...Or the community is inappropriate for you or your condition.”

Olsman believes it all comes down to keeping the beds warm and the money coming in.

Now Moryl’s two kids hope others will heed their hard learned lesson, before choosing a facility for their own loved one.

“Put safety standards in place so that the people you collect rent from are safe,” said Haring.

The family says families have to ask these facilities those tough questions like what does 24/7 front desk staff mean? Why are they there if not to watch the door? Are the doors locked? Do you have security cameras?

Waterford at Edison Lakes does not have surveillance of the exits and that is one thing that could have helped staff and police determine exactly how Christel Moryl walked into the pond and drowned.

Their lawsuit will be filed in the St. Joseph County Court in the next 14 days.

We did call and leave a voicemail for Odell asking if there is anything she’d like to say about the comments made inside the facility, but we could not reach her.