Family on the mend after plane crash 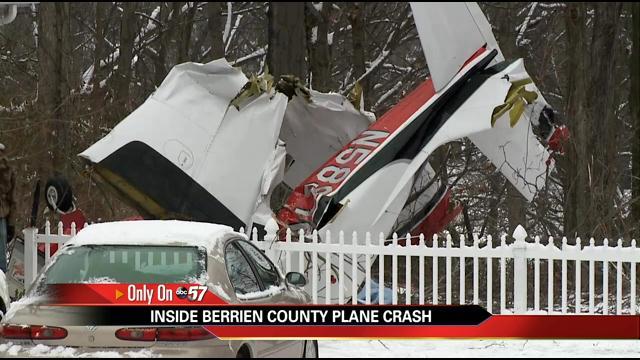 A plane crash on Friday in Berrien Springs is still affecting the aviation community at Andrews University.

Bryce Fisher, the man that made the miraculous landing just two miles from the school's airport, obtained his pilot's license from their aviation department.

He is also an airplane mechanic and has an aviation maintenance license from Andrews University too.

His family was heading from Richmond, Indiana to Berrien Springs for a family function when Bryce believes the engine failed.

Bryce had to be extricated from the plane but he has been released from the hospital.

His 70-year-old father Dr. William Fisher owned the plane and was the co-pilot. He has been flying various aircraft for 3 or 4 decades. There were reports that he was walking around after the crash.

Dr. Fisher's wife, Barbara Fisher, is still in serious condition and sources said she underwent surgery at a Kalamazoo hospital, but she is expected to be okay.

Bryce's girlfriend, Miritha Morales, was also in the plane and walked away from the crash.

Bryce's former aviation instructor at Andrews University was at the scene moments after the plane went down. His professors said the Fisher family recently donated a plane to the aviation department, and the community knew the family well.

Randy Robertson said, “Given the direction they were coming from, there weren't really any good options. There are trees and narrow little streets and that they happen to be right where they were is providence, a blessing,  miracle."

Before Robertson was an Associate Professor of aviation at Andrews University, he investigated dozens of plane crashes for the Air Force.

Robertson said, “Metal is metal. I can buy more metal, I can't buy more people. I can't replace them.”

Robertson said it was shocking to find out his former student was in the cockpit.

Robertson said, “They were able to carry all the way through the trees and impact the ground at the top of the bluff as opposed to down the bluff and the providence that they didn't actually come 3 or 4 feet higher may well have saved lives. Had they hit 4 or 5 feet down, the aircraft would have turned into an accordion. Like hitting a wall.”

The plane crashed just five feet from a house in the 400 block of Bluff Street.

The instructors showed our reporter an engine failure in a plane simulator. In the demonstration, it all happened in a matter of seconds.

Jared White said, “This means I'm about to land, and that's my crash. I mean we had roughly between 15 and 30 seconds to do minimal troubleshooting but basically try and find a safe place to land. And that's what Bryce and his family did as well.”

The FAA is investigating the plane crash and it's expected to take several weeks.