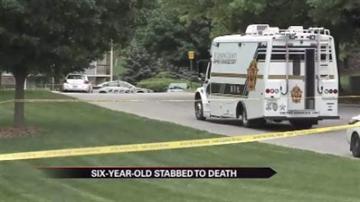 SOUTH BEND, Ind. -- Family members of the 6-year-old girl who was killed early Sunday morning said the girl’s father had threatened to kill her and her mother in text messages on Thursday.

Edward Mundia Mwaura is accused of killing his 6-year-old daughter Shirley Mundia and stabbing and injuring his wife, Lucy Mundia.

According to police, they responded to the Irish Hills apartments around 5 a.m. Sunday and found 32-year-old Lucy Mundia bleeding in the parking lot. She had been stabbed.

Police ran towards Mundia’s apartment and heard the screams of 6-year-old Shirley.

When police got into the apartment they found 33 –year-old Mwaura stabbing Shirley.

Police shot him when he wouldn’t stop stabbing her. He died at the scene.

Shirley was taken to the hospital where she later died.

Shirley’s cause of death was multiple sharp force injuries.

Mwaura died from a stab wound to the chest and multiple gunshot wounds.

Lucy Mundia was taken to the hospital and has since been released.

According to Lucy’s family, Mwaura texted her Thursday and threatened to kill her and their daughter. Police records confirmed with the County's Sheriff's Department confirm he was arrested and booked in the county jail at 7:26 a.m., but released hours later at 1:38 p.m..

James Karanja says he knows Mwaura and his family well. He says they are all part of the Kenyan community here in Michiana.

“We have a support group,” said Karanja.

Karanja says he spoke to the South Bend Police Department on Monday because he is a go-between for the police and Mwaura’s family in Africa.

He says Mwaura and Lucy were separated and had been for quite some time. Her family said that she had a protective no contact order against him.

Court records show Lucy had a protective order against her husband that was in effect from December 17, 2012 to June 1, 2013.

The stabbings happened on June 2.

Karanja says the Kenyan community knew the couple had problems, but in the Kenyan culture, divorce is seen as a sign of weakness.

"If you divorce according to our traditional culture and customs you are a laughing stock. You are a community laughing stock so even when we have disputes you can separate and still be good in your culture and you keep that and you forget about it,” said Karanja.

Lucy’s family says Mwaura’s death threats were too much for her to handle. Just last Thursday police officers were called to the Irish Hills apartment and Mwaura was arrested for invasion of privacy.

He was released the same day.

Karanja did not know about those accusations, but says he tried to get help for Mwaura through their church.

"I once talked to him like three months ago and when I talked with him he was kind of very, very much willing to reconcile, but he never showed up. He did not show up for the counseling,” said Karanja.

Karanja says he saw Shirley last Wednesday when he picked her up from school with his daughter and dropped Shirley off at home.

As for how many times the police were called here and why Mwaura was released from jail last Thursday, the prosecutor’s office will not comment.

Instead all they will say is all of the reports are under review.