Family says they found maggot in package of hot dogs 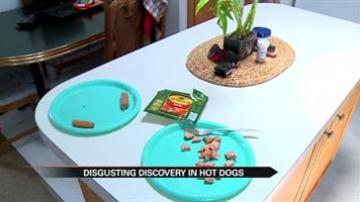 SOUTH BEND, Ind. -- Nothing says Independence Day like a couple of hot dogs on the grill and some fireworks in the sky, but one South Bend family says they won't be grilling hot dogs ever again. They found what they say is a maggot inside a hot dog.

"She cut where it was bruised and then just broke it and then she seen something in it - and that's what was in it," said Wilma Craft.

She saved it in the refrigerator, along with the original packaging.

The family says the thing inside the hot dog was a maggot.

"I wanted to take the hotdog down there and smack them people over the head down at Krogers for selling it," said Craft.

We contacted Kroger and they said Eckrich franks are sealed and frozen when they arrive at Kroger.

They think it got into the hot dog one of two ways. Either it got in there during the manufacturing process or once it was opened by the family at home.

"They wanted her at first to stick that little worm thing in an envelope and mail it. What good is that going to do?" said Craft.

Then Eckrich told the family they would send a cooler UPS and asked the family to send the alleged maggot off for inspection.