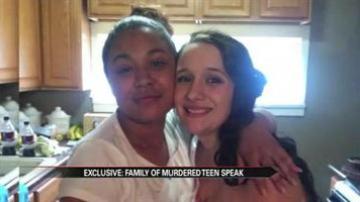 ELKHART, Ind. --An Elkhart family is mourning after 17-year-old Tiana Alter was stabbed to death Saturday night at a home in Granger.

According to the coroner, Alter was stabbed to death.

Many media reports have been calling Alter a live-in babysitter, which is only partly true.

Alter’s aunt, Katherine Moore, told ABC57 the home where she was stabbed was actually her boyfriend’s family's home and she sometimes watches his sister’s kids.

Her boyfriend, 26-year-old Michael Shoun, was arrested at the scene and is currently being held at the Elkhart County Jail on unrelated charges.

Moore held back tears and anger.

“I love her very much and I am going to miss her very much,” said Moore. “First response is I want him dead.”

“I got a text message about a quarter after 12 that something might be wrong with my niece,” said Moore.

Alter was nowhere in sight and what police asked Moore to do next was heart-breaking.

“We stayed until about 5:30 in the morning until I could identify the body and then I had to notify family,” said Moore.

Her niece had been stabbed to death.

“I feel like I lost a daughter,” said Moore.

Police arrested a person of interest at the scene.

According to the Elkhart County Sheriff’s Department website, the only person arrested at the scene was Shoun, Alter's boyfriend.

“For her life to end by someone that she knew and potentially had love for her. You do not do that to someone that you love," said Moore.

All Moore can do now is remember her niece’s wild personality and cherish their memories together.

“Tiana was always laughing and if she was not laughing it was because she was eating,” said Moore.

Moore is praying that Alter’s murderer is brought to justice.

Alter’s public funeral is this Saturday at Wally-Mill-Zimmerman from 11 a.m. to 1 p.m.

The family is still about $1,800 short on funeral costs. If you would like to donate you can do so directly at the funeral home.