Family speaks out after SUV crashes into home 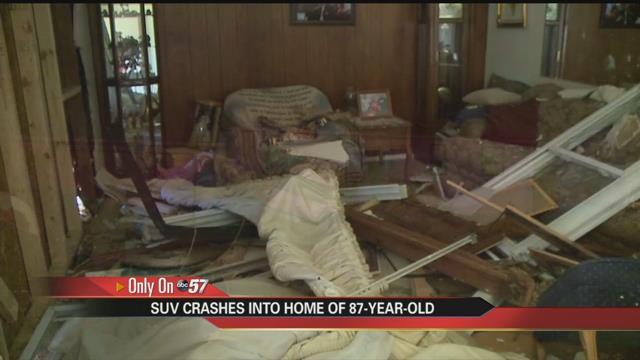 An 87-year-old and her daughter were watching a Billy Graham sermon Saturday night when they thought a bomb went off in their home.

Sandra Dudley said she turned the corner to find a SUV in their living room.

Dudley said, “We were in the back, watching Billy Graham, and I don’t know, it was just like an explosion!”

Dudley said it happened around 10:30p.m.

Dudley said, “It’s a blessing for certain, if we had been in the living room, it would have been a different story.”

Dudley's mother Ruby is 87-years-old. She said they were trapped inside the back room because of all the debris.

Dudley said, “They were telling me to get out and I was like it’s impossible, my mom has a walker and a cane! And there was debris that blocking our way.”

Dudley said a passerby came to their rescue.

Dudley said, “A guy named Mike Stevens jumps through the window and he came and just threw debris out of the way, and came back and picked my mom up.”

Dudley said the passenger of the SUV was apparently taken to the hospital and she believes the driver was arrested.

A neighbor said the SUV occupants were arguing at the scene.

Timothy Carr said, “Her arm was broken! He went down the street and brought her back, and they took him to jail.”

Benton Township Police did not pick up the phone on Sunday for comment on the investigation.

87-year-old Ruby Dudley believes she is safe because of her faith.

Ruby Dudley said, “He protected us, He cares for us, He watches over us.”