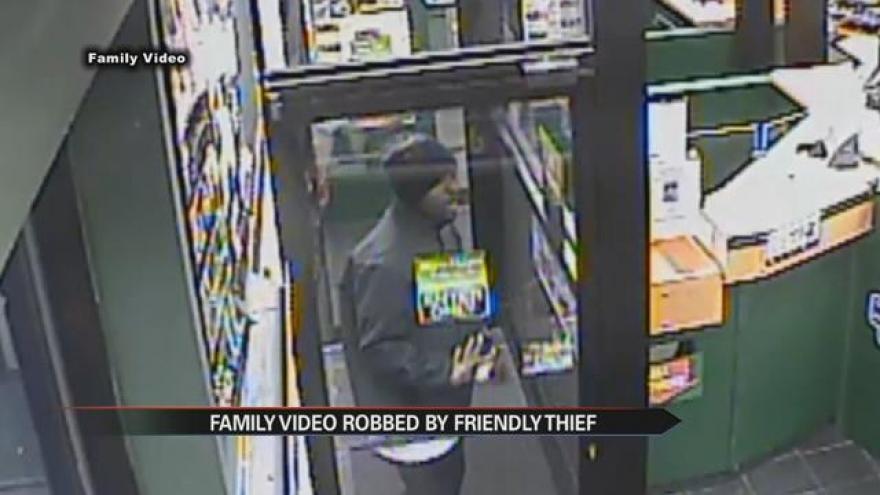 A Family Video store in South Bend is robbed twice in less than a week, and now the store’s managers want you to see the surveillance video capturing it all.

The store’s manager says when the first robbery happened on Sunday, the thief used the word “please” several times before running out with all the cash in the register but manners or not, employees don’t feel safe.

“I don’t think I’d want to shop at a store that continuously gets robbed I wouldn’t feel safe as a customer myself,” said Sharon Remmo, Family Video Store Manager.

“Sunday around 10:45 I had an employee here by herself and a gentleman walked in wearing a green jacket, he walked in behind the counter, told her to turn around that this was a robbery and he started grabbing cash,” added Remmo.

There were neither guns nor any other weapons used but he did have his manners.

“He did use the word please like I’m not going to hurt you please don’t call the cops,” said Remmo.

“He did the exact same thing the first guy did kinda walked in slowly walked in behind the register this guy knew exactly where the money was told him to turn around he wasn’t going to hurt him grabbed the money and then ran,” said Remmo.

Remmo says with the holiday season approaching, this is a busy time of year.

“We shortened our store hours were not gonna stay open until 11 Sunday through Thursday close at 10 now, two people at store after dark and that’s not a whole lot it’s not even a bandaid it’s a start but def not a solution,” said Remmo.

Remmo says she believes both robberies could have been done by the same person because of the way he walked and the fact he knew where the money was the second time but not the first time.

If you recognize the person in the surveillance videos, your asked to call the South Bend Police Department.