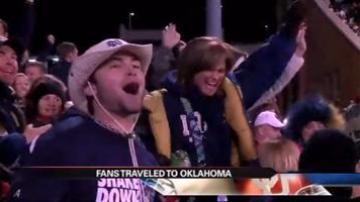 NORMAN, Okla. – While the Fighting Irish Football Team celebrated on the field after their 30-13 win against Oklahoma the fans were rocking in the stands.

It was a record breaking night at Memorial Stadium with an attendance record of 86,031 fans.

While the Irish came into the night planning to be successful they didn’t expect to be celebrating well before the game clock ran out.

"I thought it would be a little closer, but I was glad we won," said Irish fan Jack Garda.

Fans said it was great to walk away with the win, and the atmosphere didn’t disappoint.

"Atmosphere was unreal but we came through and won in the end and it was a great game," added Garda.