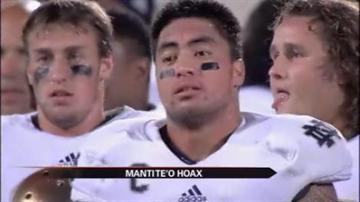 A man falls in love with a woman, and she dies of Leukemia, and then at an awards show, he gets a call from his supposedly dead girlfriend.

The saying goes, you cant make this stuff up, but apparently somebody did.

"This was a very elaborate very sophisticated hoax perpetrated for reasons we can't fully understand but had a certain cruelty of its core" said Jack Swarbrick.

And people at Notre Dame are in shock.

"I was just blown away I had no idea this thing could happen at this school," said Notre Dame student Lou Shadley.

"I don't know why somebody would lie to him. He seems like a nice guy" said Notre Dame student Matt Conaghan.

A nice guy was exactly how he was portrated by Swarbrick at the press conference. He says the woman called repeatedly after an ESPN award show. He then told his coaches, some teamates, and the athletic director what had transpired. Notre Dame then launched an independent investigation.

"The more trouble she was in. Car accident diagnoses with lukenia, failing health, the more engaged he became," said Swarbrick.

Swarbrick says Te'o was duped. The relationshiop was developed through phone calls and messages on the internet. The two never actually met each other in person. He compared this to the MTV show Catfish the follows the story of online daters.

Manti is expected to talk today about the incident. Notre Dame officials say they don't think anyone at the school reached out to his girlfriends family after she faked her death.