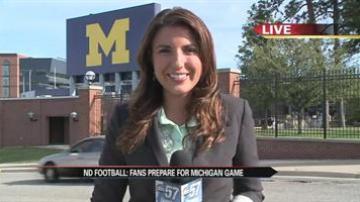 The dedicated Michigan fans were staking their claim early at Ingalls Mall on campus to make sure they get a front row seat for ESPN’s College GameDay on Saturday.

“I figured I’d just pull up a chair, grab my books, got my buddy Nick hanging out with me, and we’re just passing some time,” said Michigan fan Tim Chopp.

Chopp said he put his lawn chair in place at noon on Friday and planned to stay until show time.

While the maize and blue dominated campus on Friday, you could find the occasional green.

“One of my best friends over there, me and him go to the Notre Dame-Michigan game, doesn’t matter if it’s in South Bend or Ann Arbor this is our 5th year,” said Irish faithful Mike Basham.

Basham said for the Fighting Irish to take home the victory on Saturday the team will have to embrace the atmosphere.

“Fans you can’t even hear each other sitting next to them,” added Basham. “It’s going to be a challenge for ND, but also for Michigan because it’s a loud, rowdy place,” he said.

But both Irish and Wolverine fans can agree they know it’ll be a close game under the lights.

“It’s going to go back and forth like it has been these past three years,” said Chopp. The Irish couldn't agree more. “You really don’t know who’s going to win until the clock turns zero,” said Basham.

Kick-off is scheduled for 8 p.m. Saturday at Michigan Stadium.