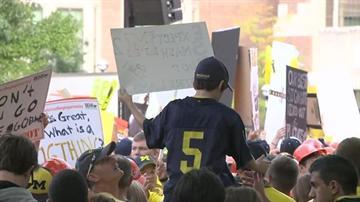 ANN ARBOR, Mich.-- Fans began packing into Ingles Mall on campus at the crack of dawn to show their dedication--wearing their team's colors and bearing those classic homemade signs that make appearances on every College Game Day show.

"It's just fun having your sign in front of the camera hoping you get on TV. It's a lot of fun," Michigan fan Lynn Preston said.

Having ESPN on campus just ramps up the level of excitement for football fans.

"Every Saturday is very exciting but this one's different because it is College Game Day and there are a lot of people down here, you get some Cheez-Its, some free goodies, so it's fun," Preston said.

Thirteen-year-old Ethan Katz traveled all the way from El Paso, Texas to witness the madness at the University of Michigan. He says his game day experience makes the long trip well worth it.

"I saw Brady Hoke. He walked by. It was cool because I see him on TV a lot so this is the first time I've ever been really close to him," Katz said.

ABC 57 found some Irish fans from right here in Ann Arbor who came out and proudly sported their blue and gold amidst a sea of rowdy Wolverine fans.

One thing everyone can agree on is that they badly want a big win for their team.

"I think Devin Gardner can bring it for them," Katz said.

"I hope that it doesn't go down to the wire like it often does because it gets a little bit too intense," Pam Preston said.