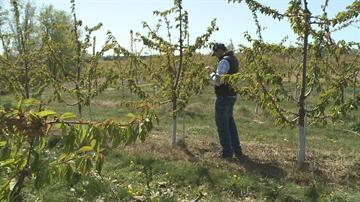 Cold temperatures last week on Thursday and Friday killed some cherries, apricots and apples blossoms on Berrien County orchards. Depending on the specific area, the damage varied.

“That’s been singed by the frost,” said Jay Jollay of Jollay Orchards in Coloma. Monday he was trying to figure out exactly what Mother Nature took. “As you can see those are brown and dead,” he said looking at an apple blossom.

Jollay said cherries and apples seemed to be the worst off although the damage was minimal. He only lost some of his fruit in low lying areas of the farm and today he’s considering himself lucky.

“I’ve talked to growers in other areas,” he said. “And they think the damage has been quite extensive.”

There’s still no time to celebrate, Tuesday, Wednesday and Thursday night could bring another cold snap and another round of damage. The coldest night forecasted is Tuesday.

“We want to get through these next two or three weeks without damage,” Jollay said. “That would be ideal.”

Usually by mid-May the threat for farmers is over but Jollay said you never know. “Michigan has also had snow in June before.” Farming in this area has always been a gamble

Jollay said there are always headaches during the growing season but this season has been extraordinary because most crops are growing about a month of schedule.

Jollay Orchards grows a variety of fruits to limit financial hardship if a particular type is destroyed by frost or freeze.