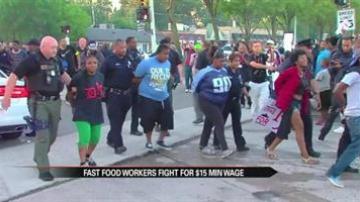 DETROIT -- Across the country Thursday, fast food workers staged protests in around 150 cities.

Major cities like Boston, Detroit, New York, and Atlanta were rocked by the protests.

Some of the workers in the protests have been arrested because of blocking the streets.

“You didn't have to leave you just had to get out of the roadway and they refused. So we ended up detaining or arresting 20 to 30 people. It's my understanding there are several bus loads going to a different area. As long as they're peaceful, we're good but you can't block the roadway. People have to get to work. You can't do that,” says Detroit Assistant Police Chief Steve Dolunt.

Workers that have been walking off the job are demanding $15 an hour and the right to form a union without retaliation.