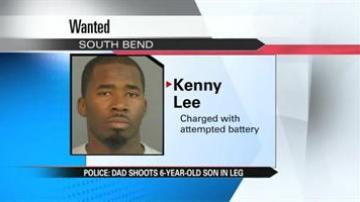 SOUTH BEND, Ind. -- The man who allegedly shot his own 6-year-old son was in court Monday for his arraignment. Kenny Lee has been charged with attempted battery and criminal recklessness for allegedly shooting his son in the leg on October 31.

Lee's next hearing is scheduled for November 12.

According to investigators, Lee was at a home in the 700 block of N. Olive Street where he had an argument with resident Jerome Holloway.

Lee's 6-year-old son was also at the home and his mother asked Lee to leave.

As Lee was riding away on his bike, he allegedly shot at Jerome, but the bullet hit his son's leg instead.