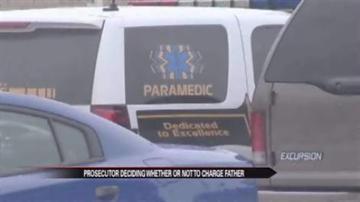 FLINT, Mich. -- A prosecutor will decide soon on whether or not to charge a Flint, Michigan father with the killing of his son after a heated family argument Sunday.

Police say the father shot his 17-year-old son in the stomach. Family court records show the family repeatedly said in the past they could not control the teen's behavior.

The father shot the teen when he was physically attacking his sister and mother.

"There was a calm maybe in the fight which allowed him to get a shot and he shot," said Scott Pavlik, Clayton Township Police Chief.

Until the prosecutor makes a decision, the father has been released from jail and all firearms have been removed from the home.