Father Hesburgh: A look back 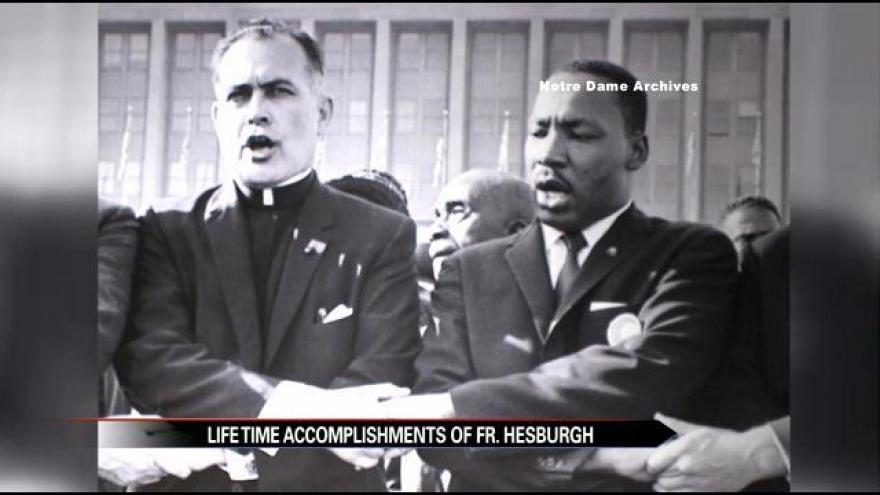 ABC57 is taking a look back at some of Father Theodore Hesburgh's accomplishments.

In May of 2013 father Hesburgh celebrated 70 years of ordination, this year in June would have marked 72 years.

Father Hesburgh attended the University of Notre Dame from 1934 to 1937, before heading to Rome to study Theology. He graduated in 1939.

In June of  1943, he was officially ordained as a catholic priest.

Two years later he earned his doctorate in sacred Theology from the Catholic University of America in Washington D.C.

Decade after decade Hesburgh served at Notre Dame, in 1945 he taught returning veterans from World War II about religion.

Then, when he was 35, he became the university's president and held the title for 35 years, the longest anyone has served as president.

He was appointed numerous positions under nine presidents, and was heavily involved in civil rights including being chairman of the United States commission of civil rights.


Hesburgh was openly opposed to the Vietnam war, despite this he was against student protests at Notre Dame and threatened expulsion to anyone who blocked university buildings.

In 1987 he retired from Notre Dame, but he continued working out of the library, focusing on developing the Kroc institute of peace studies at Notre Dame.

After he was ordained, Hesburgh wanted to become a Navy chaplain in World War II. That life-long dream became a reality in 2013 at the age of 95.

Father Hesburgh holds the world record for most honorary degrees at 150. He was the oldest and longest serving priest of the United States province.