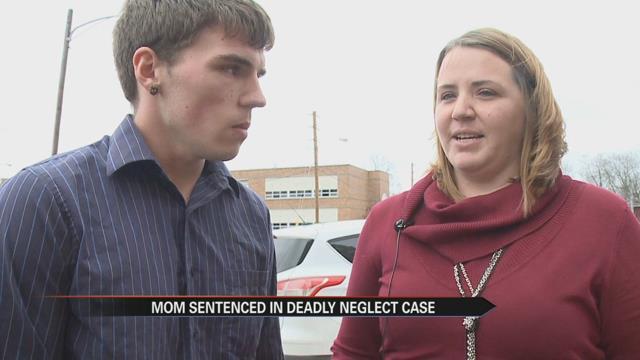 A Michiana mother will spend 35 years in prison after her 2-year-old’s death. Three months ago Serenity Wilson died from injuries she sustained during a beating.

Her mother Krysti Lavanway pleaded guilty to neglect resulting in death and was sentenced this morning.

On Wednesday Wilson talked about his daughter’s memory calling her beautiful and loving as he and relatives shed some tears.

There were a lot of tears at Marshall County Superior Court Two, including from Lavanway.

In September, Serenity was found by Lavanway beaten, bloody, and unconscious at the Economy Inn in Plymouth.

“Nothing was left out of the sentencing hearing about what took place what lead up to what took place and the result and the judge knew it and rendered a fair sentence,” says Nelson Chipman, Prosecuting Attorney for Marshall County.

Chipman says a major detail discussed in court Wednesday, was Lavanway waiting three hours to take her toddler to the hospital.

“She waited a while to get serenity help and ya know I think the judge did he handed her to the sentence she deserved,” says Mackey.

Lavanway was sentenced to 35 years and charged with neglect of a dependent resulting in death, a level one felony. The maximum sentence Lavanway could have faced was 40 years and the minimum 20.

“The judge found that to be a strong aggravator to justify adding to the the normal sentence of a level one,” says Chipman.

With Christmas just two days, the family realizes even more this will be a holiday without their little girl.

Wilson says he is still waiting for complete justice for his daughter. Serenity’s family says they will attend Shane Weedling’s hearing on February 25th.

Weedling is the other man facing charges in Serenity’s death they include murder, aggravated battery, neglect resulting in death, and possession of marijuana.