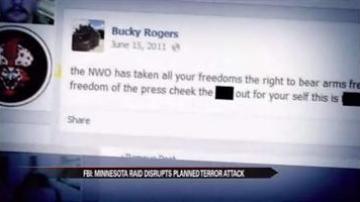 MONTEVIDEO, Minn. — The FBI says they have uncovered a terror plot in western Minnesota.

This recent plot involves a man with ties to an American milita group.

TheyI say he had a hidden supply of weapon and explosives.

The FBI describes the man as a potential domestic terrorist.

Buford Rogers was arrested at his mobile home in Montevideo, Minnesota.

Two years ago, investigators say that Rogers posted on his Facebook page about a coming war with the government.