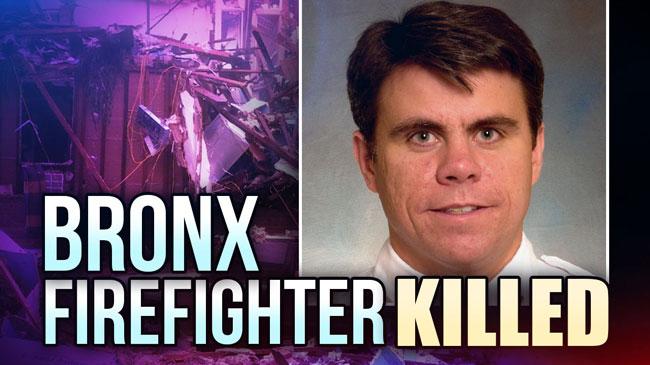 The Bronx, NY -- Officials have identified the firefighter killed in an explosion Tuesday in the Bronx as a "hero" and loving father with a family history in the FDNY.

Battalion Chief Michael J. Fahy, a 17-year veteran, was a "brave man" who was a "rising star" in the department, FDNY Commissioner Daniel Nigro said at a Tuesday press conference announcing the battalion chief's death.

"We lost a hero today, and our members are all saddened," Nigro said.

The 44-year-old was directing traffic away from the scene of a reported gas leak when the explosion occurred, Nigro said.

The blast caused the home's roof to cave in and sent pieces of the building flying through the air, some of which struck Fahey in the head and body, officials said.

At least 12 other people were injured in the explosion, including six police officers and several firefighters, authorities said. It is unclear was caused the blast, and officials say the Kingsbridge home, located at 304 W. 234th St., may have served as a grow house for marijuana.

A chief with the 19th battalion, Fahy was a husband and father to three children, ages 6, 8 and 11.

Mayor Bill de Blasio said he spent time at the hospital Tuesday with Fahy's wife and parents and witnessed their "unspeakable pain when they were told formally they had lost Michael."

"I want to thank everyone here at The Allen Pavilion for all they did to try to save him and comfort the family, and my profound thanks to the members of the FDNY and NYPD who also tried to save him," de Blasio said. "It's a very sad day for our city."

Fahy's father was identified as an FDNY official who had served for 33 years before retiring in 2011.

The younger Fahy, a Yonkers native, first joined the FDNY in 1999 and made his way through the ranks before being promoted to battalion chief in 2012.

The FDNY formally announced his death on its Facebook page Tuesday following the news conference.

The last FDNY official to die in the line of duty was more than two years ago, according to the Uniformed Firefighters Association website, when Lt. Gordon Ambelas was killed in a Brooklyn blaze in July 2014.

The UFA reports that 1,171 firefighters have been killed in the line of duty since FDNY's establishment in 1865.