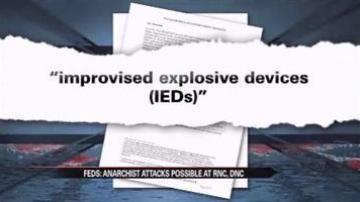 The FBI and homeland security warn anarchists may use violence to try and shut down both the Democratic and Republican National Conventions.

Extremist groups have already posted videos on YouTube, threatening to take over the Republican National Convention in Tampa.

The feds say the extremist group could even try to use improvised explosive devices also known as IEDs  It's a type of homemade bomb widely used  in Afghanistan.

The Secret Service will coordinate an operation to keep Tampa safe during the convention in their multi-agency communications center.

Extremists claim they're ready too.