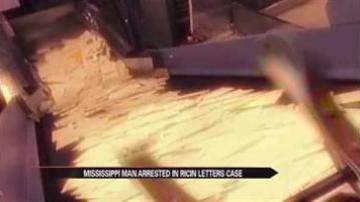 TUPELO, Miss. — Police in Mississippi arrested a man suspected of sending letters that were laced with ricin.

The FBI says agents arrested Paul Kevin Curtis at his home on Wednesday.

The letters in question were sent to President Obama and Senator Roger Wicker of Mississippi.

The Lee County Sheriff says investigators also believe a third letter possibly laced with ricin may have also been sent to a judge in that county about a week ago.

"The way those letters were typewritten to those two individuals, the postmark similarities we had, it raised suspicion that there could possibly be a connection to the letter we received in justice court," said Sheriff Jim Johnson.

The FBI says additional testing is needed on the letters to confirm the presence of ricin.

The highly toxic substance is derived from castor beans and even very little of it can kill an adult.