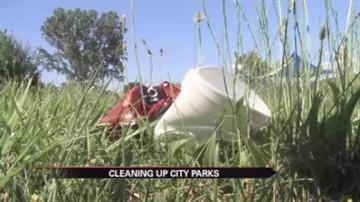 BENTON HARBOR, MI -- The City of Benton Harbor is taking steps to improve its public parks, but not everyone is happy about it. Right now -- paperwork is being drafted to transfer management responsibilities over to a conservancy board made up of residents, city leaders and local business owners. The city says it'll make cleaning the parks easier, quicker and cheaper, but some residents are skeptical.

So too -- are tall grass and litter.

That's why community leaders want to transfer park management duties over to a Conservancy Board. That board can act faster, and in some cases, without residential approval.

"In a nutshell, this is a management agreement with the non-profit that's going to be responsible for the upkeep, maintenance and improvements of the city's parks," Tony Saunders, Emergency Financial Manager, said.

Some worry minor improvements now, could be major losses later.

"I believe it's just a backhanded way of taking land from the residents," Rev. Ed Pinkney, Executive Director of BANCO, said. "They don't have to get the resident's approval."

Rev. Pinkney heads up an area civil rights group. He fears some of the city's best parks could be sold and developed without proper approval.

"If you really wanted to help the community and cleanup the park, clean it up," Rev. Pinkney said. "Why would you have to take over the parks?"

City leaders said the transfer will save the city money, while at the same time, allowing taxpayers to maintain ownership of the parks.

"They've been under this scare about it being a land grab, and it's not," Mary Alice Adams, a Benton Harbor Commissioner, said. "It's my job to make sure that it's not."

"If you want to build a hotel on top of a park, that can't happen without the city's approval," Saunders said.

At this time, it's unclear what exact improvements will be made under the new conservancy board. The City of Benton Harbor though, is asking for public input through surveys. They hope to transfer management responsibility over by July 1st, the start of the new fiscal year.