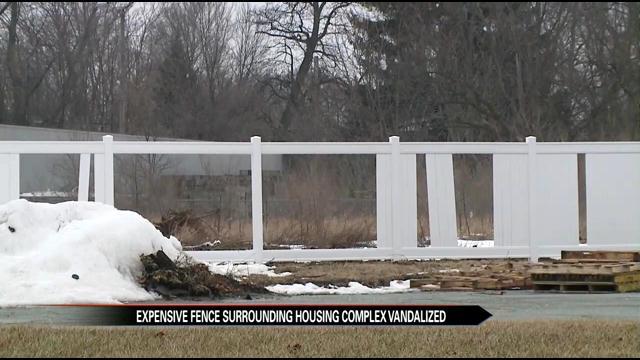 A fence was vandalized in Benton Harbor and it will cost the Housing Commission thousands of dollars to fix it.

The fence was installed in the Buss Complex over the summer. One resident said people who live there don't like the stigma of a gated community.

Williams said she's seen people kick the panels and vandalize the structure. She joked that people like holes in the fence so they can get away from police.

Williams said, “Thy can't run from the cops haha!”

The Chairman of the Housing Commission said they are aware of the vandalism.

Crenshaw estimated that $38,000 was spent to install the fence.

Williams said, "That's a lot for them to be tearing it down.”

Crenshaw said their goal was to provide a safer area for children to play at the complex.

Crenshaw said, “And I think there's been some misunderstanding, but that's part of the educational process we are trying to get through to our residents that our goal is to enhance the quality of life for our residents and their children.”

While Williams likes the fence, Charles Holloway said he hates it.

Holloway said, “I've been here about 53 years in this complex. They should have put up like a wire fence so people can't kick it in!”

If you know who is responsible for the vandalism, you can call the Benton Harbor Housing Authority.