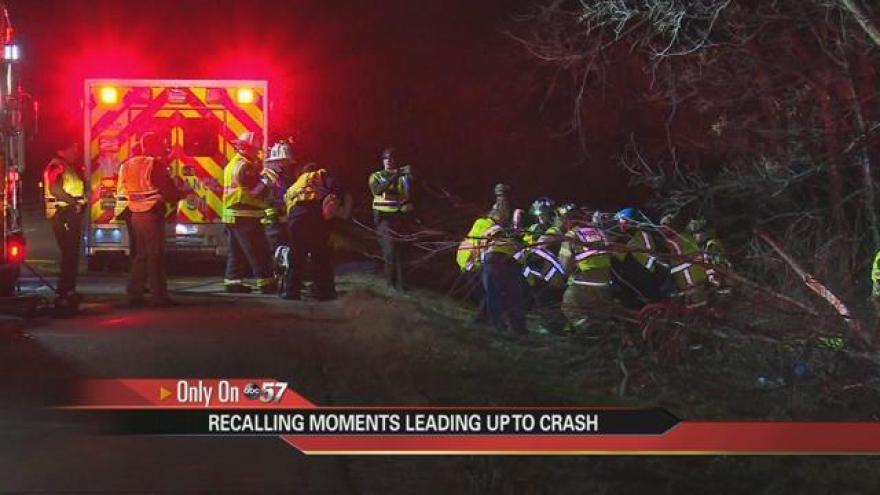 The fiance and neighbor of the woman whose truck veered off Indiana State Road 2 and smashed into trees Friday share what happened leading up to that fateful moment.

A day later, what you see in that ditch are mangled metal, a wrecked windshield, and a mirror that still shows a reflection of the trees that trapped its owner for more than an hour.

“I thought she was dead,” said the woman’s fiancé, Butch Smith.

46-year-old Diane King crashed her truck into a ditch off of Indiana State Road 2 Friday night, a little after 6 p.m.

“Diane and Butch had actually been at our house, and we had started dinner, and they were headed to get his work truck,” said King’s neighbor, Rhonda Moles.

“We got the truck and was on our way back and Diane was following me in my pickup, and she was behind me most of the time, and the next time I looked out my mirror, I didn’t see her,” said Smith.

Diane was driving west in the left lane along Indiana State Road 2, when somehow, about 8 miles down the road , she veered into the right lane and barreled into a ditch.

The truck bounced along until it got trapped between two trees.

She was stuck there for more than an hour.

“The last tree she hit sheered and took the roof of the truck off,” said Butch.

“It actually knocked the head rest right off the driver’s side seat,” he said.

“By the looks of the truck, it’s a miracle that somebody would make it out alive out of that. I mean it was a--it was just a mess,” said Moles.

Diane did survive, but her road to recovery could take some time. She has significant damage to her left side, including a collapsed lung and knee slashed to the joint.

“Still trying to figure out what happened. The only thing that I can even closely, remotely think of is maybe she blacked out, passed out,” said her neighbor.