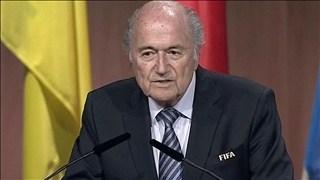 FIFA president Sepp Blatter has resigned from his position after a successful reelection.

“I will call and extraordinary congress and dispose of my function…Although the members of FIFA have reelected me as president, this mandate does not seem to be supported by everybody in the world of football,” says Blatter.

On Friday, two days after a massive corruption scandal rocked FIFA, Blatter was reelected to a fifth term as FIFA's president.

Fourteen of the most powerful officials in international soccer are accused of taking more than $150 million in bribes.

Authorities say it was a cash-for-votes scheme, determining where the World Cup and other FIFA games would be played and broadcast.

The investigation began after the United States narrowly lost the 2022 World Cup bid to Qatar, despite allegations of bribery and concerns about holding the event in the heat of the Arabian Desert.

Blatter was not named in the indictment, but sources say he is being investigated by the FBI and U.S. prosecutors.

A special election to replace Blatter is not expected to take place until late this year or beginning in early 2016.