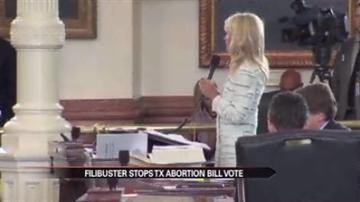 It would restrict abortions after 20 weeks and extend significant restrictions on abortion doctors, drugs and clinics.

Davis was forced to stop before a midnight deadline but the senate was unable to vote by midnight effectively killing the bill.

"There were attempts to shove every rule aside in order to try to cram this vote through, and the voices of the people who are in the capital galleries tonight could not be silenced," said Senator Davis.

Those in favor of the bill say it would not force abortion clinics to close but rather require them to use specific equipment for safety purposes.