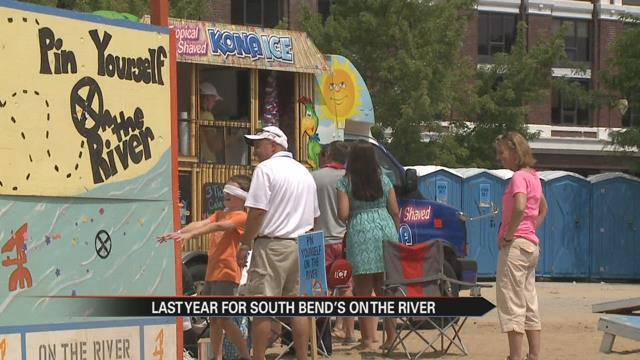 Friday will be the last opening night for On the River. The event has been around since 2008.

Volunteers have put a lot of work into setting up tents, decorations, and sand for the beach.

Over the years, On the River has brought over 20,000 people to downtown South Bend.

The vacant land off the St. Joseph River is transformed into a beach and for two days there is music, food, and activities for all ages.

Friday’s teen night will have contests, music, and food.

Saturday’s family day will include a bounce house and face painting; and Saturday night there will be a beach bash for those 21 and up.

This is the final year because the land is going to be developed into an apartment complex.

The final On the River starts Friday at 5 p.m. and Saturday at 10 a.m.

The event is held on a vacant piece of property where Colfax Avenue and the St. Joseph River meet in downtown South Bend. If you need to put the address in GPS, use 320 E. Colfax Avenue, South Bend, 46617. It is also known as the former location of The Wharf Restaurant.