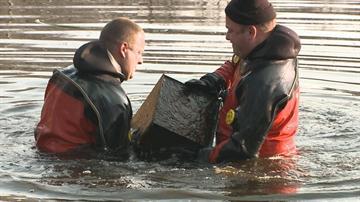 “We found the vehicle Wednesday when we were doing a training exercise testing out some new equipment for the dive team then made a plan to come back and retrieve the vehicle today,” explained Lt. Randall Miller, Assistant Commander of the Dive Team.

They’d been testing a new boat with a larger engine that allowed them to get closer to the dam and found the car.  Though it was too early to tell, the team believes the car had been there for some time.

“The vehicle looks like it’s been eroding pretty good under the water, it’s obviously full of a lot of sand and silt, it has an older Michigan plate on it,” Lt. Miller described.

Miller explained that it’s possible the car may have been in the river for years.  Police believe the car was stolen and dumped into the river.  The vehicle is an Oldsmobile Aurora with the license plate number “SAL-083.”  Anyone who may know who the car belongs too or knows anything about how it ended up in the river is asked to call the Berrien County Sheriff’s Department.

Finding a possible stolen vehicle wasn’t the biggest find for the team on Monday.  The department received a tip from an informant that a safe stolen during a robbery in 2008 had been dropped in a pond near the intersection of Sister Lakes Road and Haley Road near Silver Creek.

After nearly two-hours spent stomping through a shallow pond, Lt. Miller and Deputy David Zizkovsky recovered the safe.  The informant told detectives the safe had been stolen from Hanson’s Cold Storage in Sodus Township.  Even though they had been told where to find the safe, actually finding it proved difficult.

“It’s a very murky, silty bottom so trying to find anything in there, everything is in the muck,” explained Deputy David Zizkovsky.

But, the team found the empty safe and its door.  They searched the rest of the pond in case the thieves used the pond as a dump site for other robberies.  Immediately after finding the safe they phoned detectives working on the case.  To detectives, what’s more important than finding any evidence on the safe is the fact that the informant had given them accurate information.

“This will definitely bring some credibility to the person who provided us with the tip and also help solve the case that we’ve had open for some time and ultimately made lead to some other cases that we may have open as well,” Lt. Miller explained.

Coincidentally, the original robbery case involving the safe had actually been investigated by Deputy Jennifer Newman, an officer currently on the dive team.

“It’s interesting how things come back around and you remember bits and pieces when they do,” Deputy Newman explained.  “I couldn’t remember what exactly the safe looked like until they pulled it out and then I realized yes that’s definitely the safe.”

Anyone with information on the stolen safe is asked to call the Berrien County Sheriff’s Department.