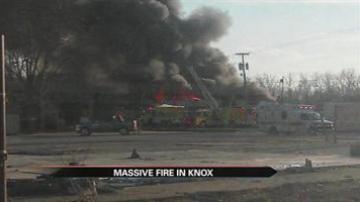 KNOX, Ind. -- Several fire departments responded to a massive fire in Knox on US 35 and Toto Road Thursday night at a scrap yard.

The Bass Lake Fire Chief said no one was injured.

Nearby residents said it was the biggest fire they had ever seen.

“Flames were probably as high as the top of the ladder truck,” Kurt Snearly said.

He said he could see the flames from seven miles away.

“There was just massive amounts of smoke coming from this recycling plant here,” Snearly said.

It took place at a scrap yard, where neighbors say they could smell the scent of burning chemicals and tires.