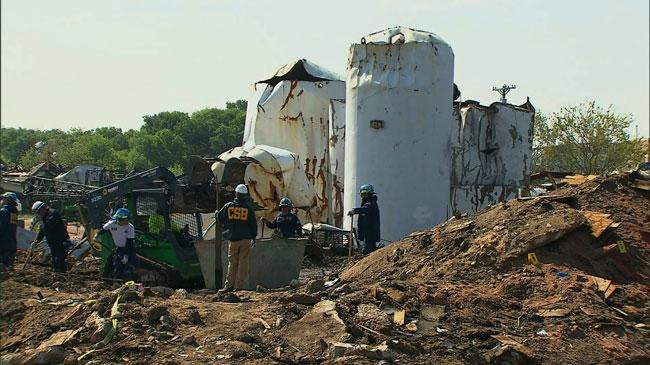 (CNN) -- The fire that led to a deadly explosion at a West, Texas, fertilizer plant three years ago was intentionally set, authorities said Wednesday.

The blast devastated the Texas town of West in April 2013 and killed 15 people -- including 12 first responders.

Investigators determined someone started the fire on purpose after conducting 400 interviews and lab work on evidence, said officials from the Bureau of Alcohol, Tobacco, Firearms and Explosives.

Authorities would not comment on whether they know of a suspect.

The ATF is offering up to $50,000 for information leading to the arrest of whoever set the blaze, which also destroyed 500 homes.

Families of the those killed have struggled to find answers to what happened on April 17, 2013.

That night, a fire broke out at the West Fertilizer Co. in West, a town about 70 miles south of Dallas.

About 20 minutes later, the plant exploded with such force it caused a magnitude-2.1 earthquake.

"It was like a nuclear bomb went off," West Mayor Tommy Muska said.

A deafening boom echoed for miles. The blast stripped a 50-unit apartment complex of its walls and windows.

It was "massive -- just like Iraq, just like the Murrah (Federal) Building in Oklahoma City," said D.L. Wilson of the Texas Department of Public Safety.

The blast left a crater 93 feet wide and 12 feet deep.

The West Fertilizer Co., which operated the plant, had warned state and local officials but not federal agencies that it had 270 tons of highly volatile ammonium nitrate on site, according to regulatory records.

The fertilizer company had been cited by federal regulators twice since 2006.

A U.S. Chemical Safety Board investigation concluded the explosion was preventable, board chairman Rafael Moure-Eraso said on the one-year anniversary of the blast.

"It resulted from the failure of a company to take the necessary steps to avert a preventable fire and explosion and from the inability of federal, state and local regulatory agencies to identify a serious hazard and correct it," Moure-Eraso said.

Elder, the ATF special agent, said Wednesday that the owner of the plant has been cooperating with authorities.

The blast was so catastrophic, it damaged or destroyed houses across 37 blocks.

"It demolished both the houses there -- mine and my mom's -- and it killed my dog," West resident Cheryl Marak said hours after the explosion.

But her husband Marty, a volunteer firefighter, had no time for panic or grief that night. He raced toward the danger, even as the threat of a second explosion loomed.

"That's just the way that we Texans are wired," said Rep. Bill Flores, whose district represents West. "Even though we face our own personal tragedies from time to time, we still know that we have to go help others -- and then assess our own tragedies later on."

CNN's Ed Lavandera and Marylynn Ryan contributed to this report.