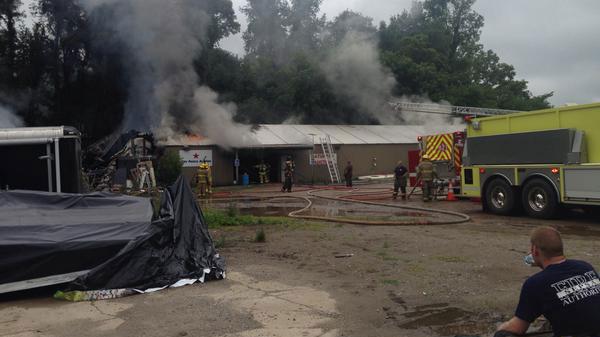 Firefighters from multiple areas responded to a fire at Five Points Auction in Porter Township in Cass County, Michigan Thursday.

The fire started in a barn just before noon.

“It was just a defensive fire from the beginning. It seemed to spread into the building on the east side, and we were unable to hit that for quite some time because we had electricity in the building and couldn’t get it shut off," said Fire Chief Michael Holdeman of the SEPSA fire authority Porter and Mason Townships.

The barn was badly damaged in the fire.

“The east building was for storage and a shop, the west building is some content storage for the auction barn and that’s where they held their auctions," said Holdeman.

Holdeman says auction workers were inside the pole barn when the fire started.

“As I understand it, they were working in the east building, and came out and noticed some fire and that’s when they called and vacated," said Holdeman.

A nearby resident tried to help the owner put out the fire, but it was too late.

“He had already used all of his fire extinguishers so I grabbed mine and tried to use what I had but like I said the fire was already way out of control," said neighbor Ronald Smith.

Smith has a theory as to how the fire started.

Six fire departments from Indiana and Michigan responded to the scene.