Fires near toll road cause concern for drivers 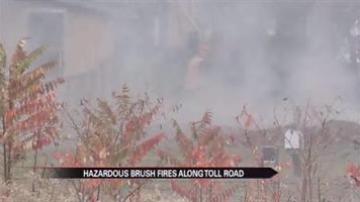 ELKHART, Ind. -- The Indiana Toll Road is busy this time of the year, but that's only part of why Osolo Battalion Chief Mike Smith is prepping his trucks.

"It's fairly normal right now for this time of the year," said Smith. "We've had a few calls."

His department covers part of U.S. 80/90, a place where outdoor burns happen often.

That smoke can be a problem for neighbors, but deadly to drivers.

"It depends on the amount of smoke," said Smith. "Sometimes we go out on the Toll Road three or four times a year that, and sometimes we don't go out at all for smoke problems."

People living in the county are able to burn with a permit, but they don't always follow those rules.

"Most people do what they want anyways," said Smith. "It's their property, but we try to work with the public and explain to them the hazards."

There are fines for not following the rules, but they usually only result in a few bucks.

With limited county resources to enforce rules fully, Smith is just hoping people are extra cautious if they are burning near the roadways.

"Common sense goes a long way," said Smith. "If it's really windy outside, it's not a good day to burn."