First baby of the new year born at 5 a.m. 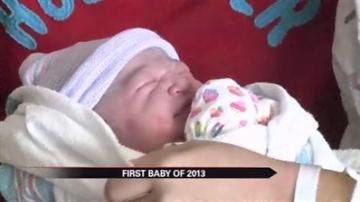 ST. JOSEPH COUNTY, Ind. -- While most people were welcoming in the new year, local hospitals were waiting to welcome the first baby of the year. Early Tuesday morning, the first baby of 2013 was born at St. Joseph Regional Medical Center.

As the world counted down to midnight, all the area hospitals anxiously waited for a special delivery.

"I honestly didn't think that she would be the first,” said Jhontee Dietz, Diamond’s mother.

Neither did her father.

"I thought it was going to be way after New Years- like a week after that,” said Alejandro Alvarez.

She isn't her mom's first though. Diamond will go home to two older brothers ages 2 and 4 who can't wait to take care of their little sister.

"My oldest one is for sure and my littlest one thinks she is a baby dinosaur. The whole time in my belly he'd say, 'Look at the baby dinosaur,' and see a foot move across my belly,” said Dietz.

When Dietz stopped by the hospital at 2pm on New Years Eve, she thought they'd send her home. But her husband quickly realized he needed to cancel plans.

"Yeah I told my brother, ‘I don't think I'm going to make it this year with you. I got something else going on,’” said Alvarez.

Now their child's birth is the talk of the year for their family and friends, at least so far.

The hospital said doctors delivered the next baby about a half an hour later, so diamond was the clear winner.

Her parents say they're excited to tell her all about it when she's older.